Draw is out! Captains, you have been contacted with your Saturday schedules.

Reminder to all participants to arrive 45 mins early prior to the first match for registration! 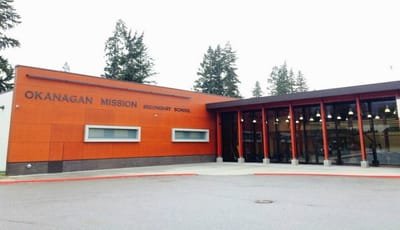 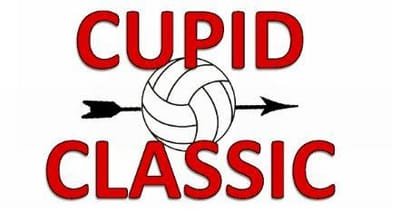 If you are short 1 or 2 players then please contact Mike – clark.michael@gmail.com as he has some individuals looking for teams.

Participants:  Please arrive 45 mins prior to your first match for registration and waiver signing.  Thanks! 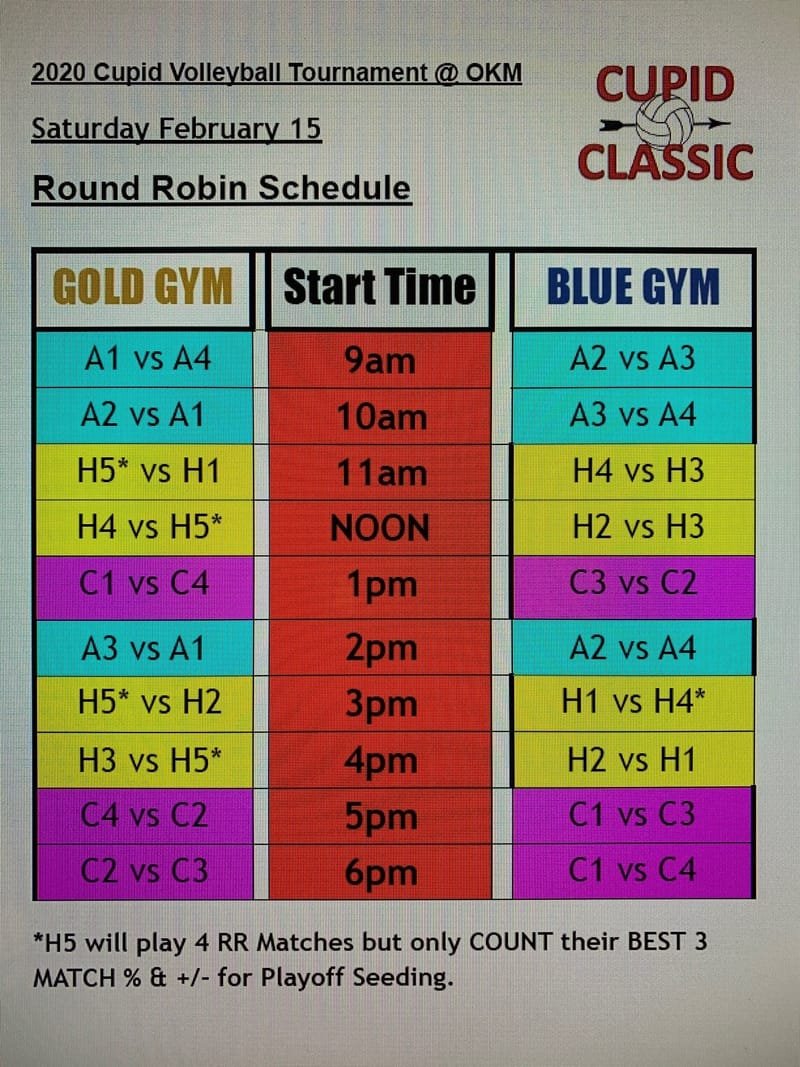 REGISTRATION IS NOW SOLD OUT AND CLOSED!

Please email Mike the following to Register your team (Clark.michael@gmail.com):

BEFORE your team’s first MATCH ALL PARTICIPANTS MUST Review, Initial and SIGN the Letter of Understanding and Agreement in order to be eligible to play in the tournament. By not signing you are in eligible. - There will be copies of these at the gyms at registration.

Similar Rules as in 2019 with a few RULE Changes
C.V.A  Rules apply - https://www.volleyball.ca/uploads/Development/Referee/Rules/2016_17_Indoor_Rulebook-March2017.pdf

There will be some ‘leniency’ in the interpretation of the rules (ie. Uniforms etc.) BUT the Heads of the CUPID Tournament Committee - Mike Clark & Paul Thiessen - have the FINAL say. By registering for the tournament ALL teams acknowledge and agree to abide by the CUPID’s committee decisions.

•All participants must be age 19+, and will be expected to sign individual waivers of liability & acknowledgement of the ZERO TOLERANCE ALCOHOL RULE before commencing their first warm-up. You are ineligible for play until this is done.

Any children in attendance at this adult tourney MUST be supervised at all times while in the gyms and area.

• ZERO TOLERANCE for ALCOHOL on the school property - including parking lots - if it is brought to the attention of the CUPID’s Organizers that an individual from a team has alcohol in their possession on the property then the ENTIRE TEAM WILL BE IMMEDIATELY DISMISSED from the tournament. All teams need to act accordingly as this is a school facility and there will be students and faculty on the premises. Please respect the venue so we are able to offer this tournament to the public. If there is an incident at this tournament then the School District will not allow it in the future.

ZERO TOLERANCE RULE will also include if a team has spectators - family/friends - watching their game and consuming alcohol then the entire team may be dismissed.

ROUND ROBIN:  50 MIN running time starting at top of each hourEach player is only allowed to play for 1 team ONLY during the tournament. You are not allowed to play for other teams nor are you allowed to play in different divisions. -The only exception (ie. injury) to this MUST be pre-authorized by Mike Clark as well as your opposition prior to the match beginning.

• Call own nets and touches.
• Serving out of rotation will result in loss of point as well as loss of serve.
• Please keep breaks between sets to 2 minutes or less.
• Libero is permitted, although not permitted to serve and if the Libero is female there still needs to be 2 female players on the court when the Libero subs off.
• No contact of the net by any player involved in the play of the ball.
• If the ball touches the ceiling the play is over BUT if it goes through the rafters without contact play goes on as long as it STAYS on the same side of the court it was touched last.
• Only players on the roster will be eligible to play in the tournament.
• Keep gyms clean and clean up your own garbage. No food in the gyms at any time!
• Sportsmanship is Mandatory
• Ball can touch the net on a serve
• Setting a serve is allowed
• You may use any part of the body to play the ball
• High Competitive - Net Height 2.34 M - (Jr Boys Height); Low Competitive – 2.34 M (Jr Boys Height)

SCORE KEEPING - volunteer scorekeeper will be supplied for all your matches.

Who serves 1st? ROSHAMBO - winner chooses either SERVE or SIDE. If a 3rd set is needed, then ROSHAMBO again just remember you switch sides after the first team is to 8 points.

GAME BALL - to be agreed upon by opposing teams within each match. If not agreed to then CUPID committee will decide (Ie. BADEN ball currently being used in High Schools).

PLAYOFFS - Guarantee of 1 playoff match minimum.
• Best 2 out of 3 - first 2 games to 25 with a CAP at 27.
-No CAP in Championship & Consolation Finals matches
• 3RD GAME is to 15 NO CAP
• Self officiating - No linespeople
• Any issues or foreseeable issues, please see Mike ASAP.
• Scorekeeper supplied

GHOST RULE:
We will be using the ghost rule. You will be allowed to play with only 5 players (YOU MUST have at least two girls playing). There will be an empty spot on the court that will rotate around (so you will have two in the front row during some rotations) and when the “ghost” is supposed to serve, you will lose point and serve! If a ghost rule is in effect, then your team may be asked to submit a proper lineup (rotation) sheet for the benefit of the scorekeeper and your opponent.

The Okanagan Mission (OKM) Secondary School Volleyball Program sends out a HUGE ‘THANK YOU’ to all of our 2020 sponsors!

I BUILT MY SITE FOR FREE USING